WILD ONION PHAT CHANCE BLONDE beer tap handle. One of the earlier Chicago breweries hitting the craft scene in 2003. Paying homage to the origin of Chicago’s name. Its was said that the onions were described as CHE_CAU_GUA by the early inhabitants of the land. The wild onions used to grow in the wetlands near … more 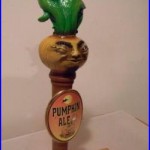 Up for sale here and just in time for pumpkin season we have a great tap handle from wild onion. The handle has been used but it’s in excellent condition. I try and crate value for the customer so this way I start all the handles at 9.99. This was it keeps it simple for … more